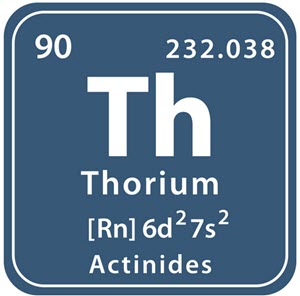 Thorium is a metallic chemical element that can be used to as fuel in fission power reactors. Several thorium reactors have been built.

Appearance: Silvery. Will tarnish when exposed to air, since it reacts with oxygen to form thorium dioxide.

All known thorium isotopes are unstable. The least unstable of them is Th-232, with a half-life of over 14 billion years.

Thorium is believed to be over three times as bundant as uranium in the Earth’s crust.

Thorium is chiefly refined from a type of sand called monazite. 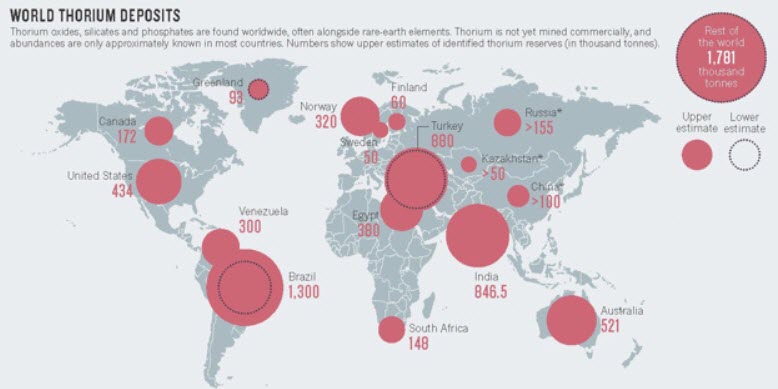 In 1829, the Norwegian mineralogist Morten Thrane Esmark collected mineral samples on the island Løvøya in Norway, and sent them to his father, who was a professor of mineralogy. The father sent them on to the Swedish chemist Jöns Jacob Berzelius, who confirmed that it was a previously undescribed mineral which contained an element that so far had been unknown to science. Berzelius named the new element thorium after Thor, the Norse god of thunder.

Applications for thorium were developed in the late 1800s, but its radioactivity wasn’t widely acknowledged until the first decades of the 1900s.

Thorium-based nuclear power generation is primarily fueld by the nuclear fission of the isotope uranium-233 which is produced (transmuted from) from the isotope thorium-232, which in turn is derived from naturally occuring thorium.

The idea of using thorium as the starting point in a nuclear powerplant instead of naturally occuring uranium was proposed by the Indian physicist Homi J. Bhabba in the 1950s, and several plants were built in the 1960s.

What is the thorium fuel cycle?

The thorium fuel cycle is a nuclear fuel cycle that uses the thorium-232 isotope as fertile material. 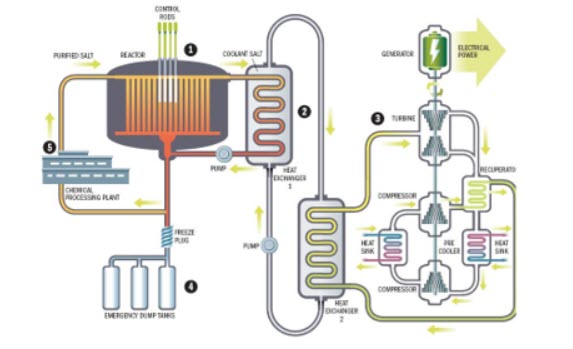 Inside the reactor, Th-232 is transmuted into the fissile artifact uranium isotope U-233. (What happens si that Th-232 absorbs neutrons and the result is U-233.) U-233 is then used as nuclear fuel.

One advantage of using thorium as the origin fuel is that this cycle produces less plutonium and actinide.

Here are examples of thorium fueled reactors from around the world, both experimental and for power plants:

The NRX (National Research Experiment) reactor was a nuclear research reactor came into operation in 1947 and was shut down in 1993. Located in Canada, at the Chalk River Laboratories (a national research facility).

Just like NRX, the NRU (National Research Universal) reactor was built at the Chalk River Laboratories in Canda. The reactor had three main jobs: it was a test bed for developing fuels and materials for the CANDU reactor, it produced neutrons for researchers, and it generated isotopes for medical use in 80 differnet countries.

Dragon was a high temperature gas-cooled reactor with experimental pin-in-block design. It was located in the UK, but run jointly by several countries (UK, Norway, Sweden, Switzerland) as a OECD-Euratom project. Active 1966-1973.

A liquid metal fast breeder reactor using ThO2 blanket. Located in India. Started in 1985 and is still in operation.

This is a research reactor in India, started in 1996. It is fueled by uranium-233 metal produced by the thorium fuel cycle harnessed by the neighbouring FBTR reactor. India has large Throrium deposits and using them to produce nuclear fuel is a key strategy for their nuclear energy program.