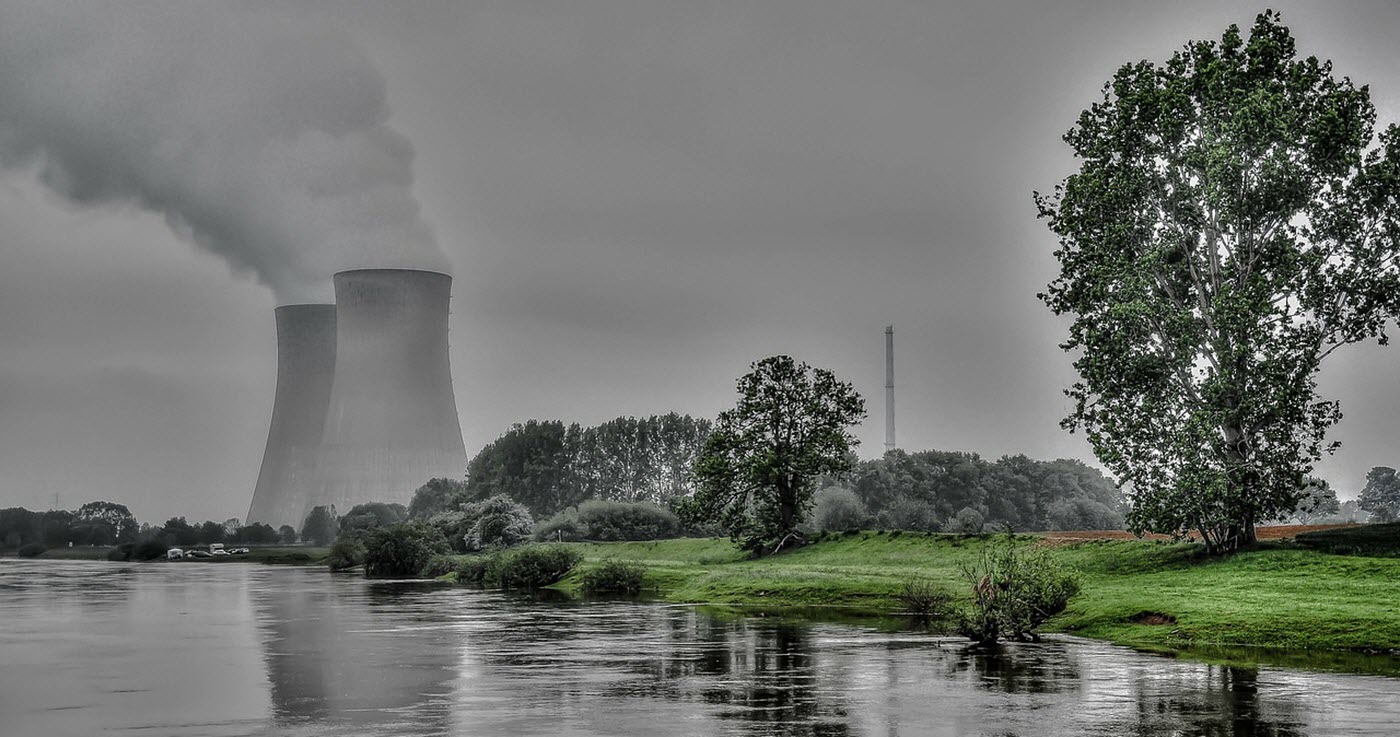 Certain nuclear reactions will release nuclear energy, which can be utilized by us, e.g. in nuclear power plants that produce electricity with the help of steam turbines and a generator.

Nuclear power can be obtained from nuclear fission, nuclear fusion, and nuclear decay. As of 2019, all commercial nuclear reactors use fission, and nuclear fission of uranium and plutonium is the dominating source of energy in commercial nuclear power plants. A lot of research has been put into trying to create a way of using nuclear fusion as the power source instead, but so far there are no power plants running on fusion. Nuclear decay is only utilized as an energy source in certain niche applications, such as radioisotope thermoelectric generators (RTGs) in satellites, space probes, and unmanned remote lighthouses.

Data from 2017 show that in that year, nuclear power plants supplied us with 2,488 terawatt hours (TWh) of electricity. This was roughly equivalent to 10% of the total global electricity generation.

Nuclear power is classified as an energy supply that only releases very low amounts of greenhouse gas. Increased reliance on electricity from nuclear power plants has therefore been highlighted as a way of combating global warming. Major problems associated with nuclear power plants is the risk of nuclear disasters and the current lack of safe long-term storage solutions for the long-lasting and very dangerous radioactive materials that are created.

As of 2018, the International Atomic Energy Agency (IAEA) knew of 449 operable civilian fission reactors in the world used to generate electricity for the power grid. Their combined capacity was 394 GW.

A majority of the reactors that were under constructions in 2018 were generation III reactors located in Asia.

Nuclear power plants around the world

There are nuclear power plants in operation in circa 30 countries worldwide. A majority of these countries are located in Europe, North America, or Asia (especially East Asia and South Asia).

In 2012, the year after the Fukushima Daiichi nuclear disaster, the global nuclear electricity generation was at its lowest level since 1999.

Only five countries in the world derive a majority of their electricity from nuclear power plants. They are France, Slovakia, Ukraine, Belgium, and Hungary.

The single largest producer of electricity from nuclear powerplants is the United States, where well over 800,000 GWh was produced in 2017.

Examples of countries that are going in the opposite direction, i.e. planning to phase out their nuclear power plants, are Germany, Switzerland, Belgium, and Spain. Italy closed all its nuclear power stations by 1990 after a national referendum. Sweden, the Netherlands, and Taiwan are also considering a phase-out, but the political situation there is more fractured and no commitment has been made to firm plans.

The largest nuclear power plant in the world

The largest nuclear power plant in the world by net electrical power rating is the Kashiwazaki-Kariwa Nuclear Power Plant in Japan’s Niigata Prefecture.

Its nameplate capacity is 7,965 MW generated from five units producing 1,067 MW each and two units with a capacity of 1,315 MW each. However, at the time of writing, all its power generating units are shut down since safety improvements are being carried due to increased safety concerns in the wake of the Fukushima Daiichi nuclear disaster in 2011. Reactors 6 and 7 are the ones scheduled to be restarted again first. Reactors 2, 3 and 4 were already shut down when the 2011 earthquake occurred, since they had been shut down after an earthquake in 2007 and not restarted again.

The Kariwa Nuclear Power Plant was built during the first half of the 1980s and is owned and operated by the Tokyo Electric Power Company. It houses the world’s first Advanced Boiling Water Reactor.

Nuclear power by country in 2017

Scheduled to be phased-out by 2022

Most reactors are currently stopped, since safety improvements are being carried out

Phasing out is planned

Many corporations in the nuclear industry are privately owned but there is also a number that are publicly traded and that you can buy stock in.  Examples of companies active in this nuclear industry include NuScale, Energy Solutions, and Duke Energy.

If you want to buy stock in a company in the nuclear industry you are going to need an account with a stockbroker. If you want to invest in a company that is listed on the NYSE or NASDAQ then you can choose any cheap stock broker such as eTrade, RobinHood or TD AmeriTrade. I personally use the RobinHood app that allow me to trade for free without any trading fees.

If you want to invest in a foreign company listed on any other stock market such as the Frankfurt Exchange or the Tokyo Stock Exchange then you need to make sure that the stockbroker you have chosen offer trade on this exchange before you register with that browser.